Was Jesse James Really Murdered by his own Gang? 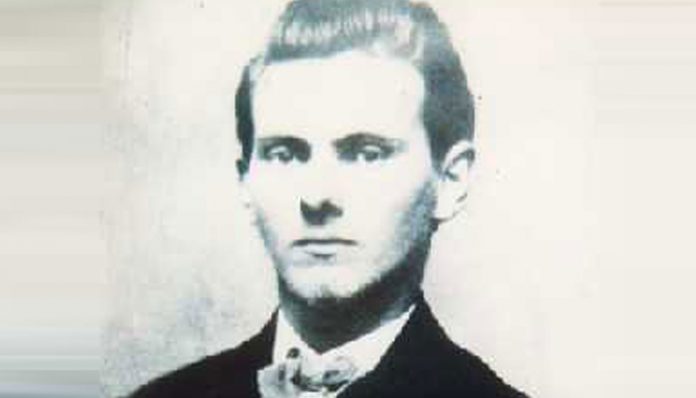 Jesse James was a famous guerrilla during the American Civil War, involved in many atrocities and murders. Jesse and his older brother, Frank, became gang leaders and bank and train robbers after the Civil War. There are popular portrayals of James as a Robin Hood, stealing from the rich and giving to the poor. However, there is no evidence that he or his gang shared the money and items obtained in their robberies. James was a celebrity while he was still alive and he became a legendary figure after he was murdered by one of his own gang members (who wished to claim the reward for his death).

As soon as Jesse James’ death was announced, rumors began that another man had died in his place, and his supposed death was all a scam to allow James to escape justice. One man, J. Frank Dalton, even claimed to be James, and had several body features (bullet wounds, collapsed lung, damaged fingertip and burned feet) that resembled the characteristics of the real James. However, his recollection of earlier life events did not stack up when questioned by relatives of the real James.

The presumptive remains of Jesse James were originally buried on the James family farm and later reburied in the Mt Olivet Cemetery. In order to determine if these remains really belonged to Jesse James, samples were collected from both burial locations and genetically analyzed.

Genetic analysis of the presumptive remains of Jesse James

There are three regions of the mtDNA that can be analyzed – HVR1, HVR2 and the coding region. This study sequenced the first hypervariable region (HVR1) from the two references’ blood samples and from specimens presumed to belong to Jesse James – two hair samples from the original burial site and two molar teeth from the reburial site. The hair and teeth samples all revealed the same mtDNA HVR1 sequence, indicating that they came from the same individual. This mtDNA HVR1 sequence also matched the sequence obtained from the two reference samples.

Conclusions of the DNA Analysis

This mtDNA analysis confirms that the remains buried at the James farm and subsequently moved to the Mt Olivet Cemetery did belong to a maternal ancestor of the two maternal descendants of Susan James. Of course it is possible that this maternal ancestor was not Jesse James, but these mtDNA results are in complete agreement with other scientific and historical records. Therefore it is very likely that Jesse James was indeed murdered in his own home in 1882.

The DNA tests conducted in this study has defined the mtDNA profile of Jesse James. If you have taken the mtDNA HVR1 (Standard Maternal Ancestry) test, you can compare your DNA against Jesse James to see if you may have descended from the same maternal lineage as this famous American outlaw.

Previous articleWas Anna Anderson the Last Remaining Romanov?
Next articleThe Spread of DNA From “Niall of the Nine Hostages”