Who was the Mysterious Dark Countess? 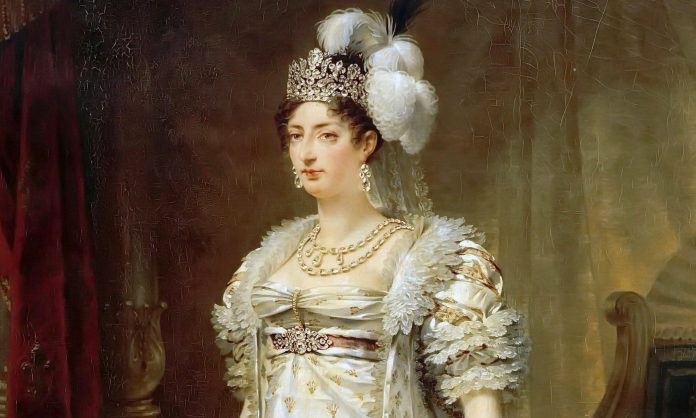 In 1807, an affluent and mysterious couple appeared in Eishausen, a village in central Germany. They lived for the next 30 years in self imposed solitude in the castle of the Duke and Duchess of Saxony-Hildburghausen. The villagers referred to this secretive couple as the “Dark Counts”. The Dark Countess died in 1837 and was buried under the name of Sophia Botta. The Dark Count died in 1845 under the name Vavel de Versay, but was later identified as Leonardus Cornelius van der Valck, the secretary of the Dutch embassy in Paris.

So who really was the Dark Countess? The most widely believed proposal was that she the true Princess Marie Thérèse Charlotte of France, daughter of Louis XVI and Marie Antoinette. Marie Thérèse was imprisoned for two years in the Temple of Paris after her parents were executed in 1793. According to historical documents, she was banished to Vienna upon her release and married to her cousin, Duke of Angoulême. However, many people have questioned this version of events. The most common theory was that Marie Thérèse would have been so emotionally unstable after her imprisonment that she was instead substituted with her paternal half-sister, Enerstine Lambriquet. Hence the whereabouts of the true Princess were unknown.

Genetic analyses of the Dark Countess

In 2013, the remains of the Dark Countess were exhumed and two small sections from her femur were removed and analyzed at independent laboratories. The two hypervariable regions of the mitochondrial DNA (mtDNA) genome were sequenced from these bone fragments. Mitochondrial DNA (mtDNA) is strictly maternally inherited (mother to child) and there are hundreds of copies of the mtDNA genome in each of our cells, making this DNA type very useful for the analysis of ancient tissue samples.

The DNA tests conducted in this study have defined the mtDNA profile of the Dark Countess (Sophia Botta). If you have taken the mtDNA HVR1 and HVR2 (Advanced Maternal Ancestry) test, you can determine if you may have descended from the same maternal lineage as this affluent and secretive woman.