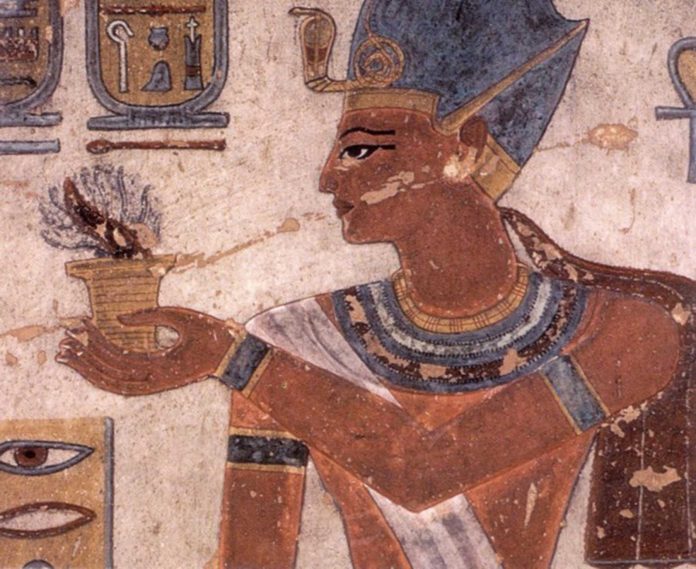 Usimare Ramesses III was the second Pharaoh of the Twentieth Dynasty, ruling Egypt for 31 years from 1186 – 1155 BC. During his reign, constant war and severe famine occurred in Egypt leading to a decline in the Egyptian political and economic power.

Papyrus trial transcripts indicate that Tiye (one of the Pharoah’s secondary queens) was determined to enable her son, Pentawere, to take over the throne. To achieve this, both Ramesses III and his eldest son (and chosen successor) Ramesses IV needed to be killed. Tiye enlisted the help of several people, including the physician and court magician to conjure black magic to help with their plot. It is unknown how or when Ramesses III was killed, but the plan to kill his successor, Ramesses IV, ultimately failed, so Ramesses IV rightly took over the throne. Ramesses IV quickly put the conspirators to trial and many were executed or were given the opportunity to take their own lives.

How was Ramesses III murdered?

The mummies of Ramesses III and an unknown man (from the royal cache at Deir el Bahari) were recently analyzed by anthropological, forensic, radiological, and genetic methods. The CT scan revealed a lethal wound in the throat of Ramesses III’s mummy, concluding that he was killed by having his throat cut, rather than by poison (as has previously been suggested). This wound also contained a Horus eye amulet, an object that was believed to have healing powers and provide protection, and the neck area was heavily wrapped with a collar of thick linen layers.

Who was buried near Ramesses III?

Another mummy buried nearby to Ramesses III was also analyzed. This second mummy underwent an unusual process of mummification, as there was no evidence of removal of the organs, or any detection of embalming materials. Other abnormalities were detected, including weird skin folds around the jaw and neck area and gas formation in specific body parts, which can be indicative of death by suffocation, or possibly being buried alive. This second mummy was also wrapped in goat skins, which were regarded as impure. The researchers speculated that this second body was Pentawere and he was buried in this way as a punishment for his involvement in the death of his father, Ramesses III.

Genetic analysis of the mummies

The best ways to determine father-son relationships are by analyses of paternally inherited Y-DNA and autosomal DNA. The Y-DNA STR profile of each mummy were determined and proven to be identical. An analysis of autosomal markers also showed that the younger mummy had at least one matching allele for each autosomal marker.

The identical Y-DNA profiles and autosomal half allele sharing strongly suggest a father-son relationship. The researchers predict that the second unknown mummy is Pentawere, Ramesse III’s son, who was involved in the harem conspiracy. The abnormalities detected in the second mummy, suggest that Pentawere was sentenced to death by either suffocation or being buried alive.

The DNA tests conducted in this study have defined the Y-DNA STR profile of Ramesses III. If you have taken the Y-DNA STR marker (Paternal Ancestry) test you can determine if you have descended from the same paternal lineage as this famous Pharaoh.

Previous articleThe Genetic Legacy of the House of Aisin Gioro
Next articleWho was the Mysterious Dark Countess?