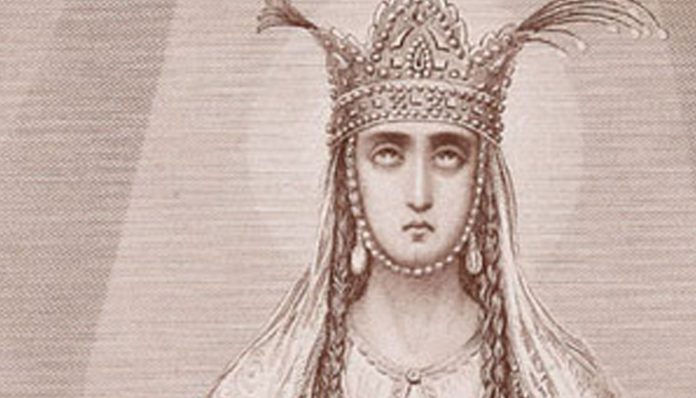 Queen Ketevan was a queen of Kakheti in eastern Georgia. In 1614, she became a prisoner of Shah Abbas I of Iran in a failed attempt to prevent Kakheti from being attacked by the Iranian armies. For ten years, she was kept captive in Shiraz, Iran, before she was tortured to death for refusing to convert to the Islamic faith. Shortly after her death, two friars unearthed the remains and kept them hidden for three years before bringing the right arm to Goa, India in 1627. The arm was kept in a stone box on a window in the St Augustine convent.

Through the 15th and 16th centuries, the St Augustine convent was enlarged and rebuilt before collapsing into ruins in 1842. Queen Ketevan’s arm bone was lost in the ruins, and since 1989 many different groups have attempted to find it. Finally in 2004, an arm bone and two other bone relics were found. Based on historical records, it was assumed that the arm bone was the missing arm bone of Queen Ketevan and the other two bone fragments belonged to two friars (Friar Guilherme de Sto. Agostinho and Friar Hyeronimo da Cruz). Genetic analyses were conducted to confirm the identity of these bones.

The mitochondrial DNA (mtDNA) was extracted from the arm bone and the two bone fragments and the mtDNA profile was determined for each individual. The high copy number (hundreds of copies per cell), rapid evolution rate and strict maternal inheritance of mtDNA make this DNA type the most suitable and informative for the analysis of ancient human remains. There are three regions of the mtDNA that can be analyzed – two hypervariable regions (HVR1 and HVR2) and the coding region.

The geneticists involved in this study sequenced one hypervariable region (HVR1), as well as select changes within HVR2 and the coding region to confirm the mtDNA haplogroup. This analysis showed that the arm bone belonged to mitochondrial haplogroup U1b – a haplogroup that has a moderate to high frequency in Georgia, but is absent from Indian reference samples. The gender of this arm bone was also confirmed as female by genetic analysis of the gender-specific amelogenin marker. The two other bone fragments have mtDNA profiles (haplogroups R6a and U2a) typical of Indian populations.

Genetic analyses of the arm bone found in the ruins of the St Augustine convent identified a typical Georgian mtDNA profile, as expected for the Georgian Queen Ketevan. Analyses of the other two bone fragments showed typical Indian mtDNA profiles, as expected for the two friars who were members of the local Indian population. The results of these genetic analyses along with historical and archaeological data, confirm the positive identification of the lost arm bone of Queen Ketevan.

The DNA tests conducted in this study have defined the mtDNA profile of Queen Ketevan and two friars. If you have taken the mtDNA HVR1 (Standard Maternal Ancestry) test, you can compare your mtDNA against these profiles to see if you may have descended from the same maternal lineage as the Georgian Queen Ketevan or one of the two Indian friars.

Previous articleWho was the Mysterious Dark Countess?
Next articleDid Thomas Jefferson Father the Children of his Slave?