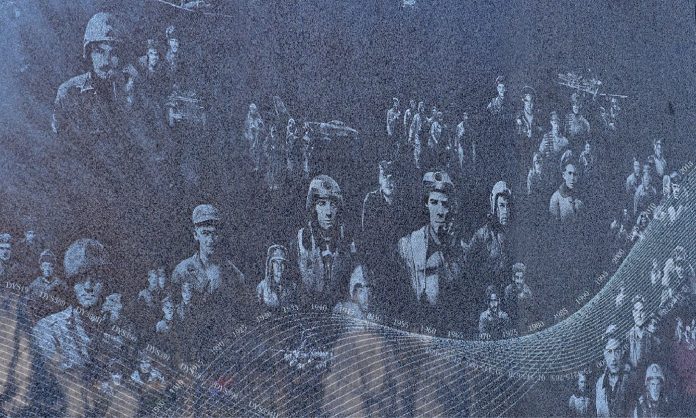 DNA tests to confirm the identity of US soldiers, who were casualties of the Korean War.

Fifty-five boxes with remains of US soldiers from the Korean War travelled from Pyongyang to Hawaii last month. They signify a goodwill gesture, following the historic meeting of the leaders of North Korea and the US.

All 55 boxes were accompanied by a single set of military identification tags. This means officials aren’t sure exactly how many bodies are in these boxes, or even if they contain remains of US service men.

Luckily with modern DNA sequencing technologies we can now answer these questions. And attempt to confirm the identity of these unknown soldiers, who gave their lives in Korea more than 50 years ago.

The Korean War took place from 1950 to 1953 between the two Koreas.  South Korea was principally supported by the US, while China and the Soviet Union (at the time) supported North Korea.

More than 36, 000 US service members died in the Korean War. Over 7,700 soldiers who participated in the war are still missing, and about 5,300 listed as missing in action on Korean soil.

Identifying the remains with DNA

It’s very likely that these boxes contain remains from more than one soldier. However, the state of the remains will make it impossible to use typical identification procedures like fingerprints, dental analyses, clothing and morphological data to confirm their identity.

This is where DNA analyses prove to be useful. Such analyses have been used to successfully identify victims of World War II from remains found in mass graves.

Two of the main types of DNA analyses that can be used for identifying remains include Y-DNA profiles and mitochondrial DNA (mtDNA) profiles. With these tests scientists can first pinpoint the number of different soldiers (or people) that they are looking to identify. They can then use existing databases and reference samples from families missing loved ones from the Korean War to find matches, to confirm the identity of the remains.

Y-DNA is found on the Y chromosome. It is passed on essentially unchanged from father to son on the direct paternal line. Women have two X chromosomes and men have one X chromosome and one Y chromosome. So, Y-DNA analyses are only useful for identifying remains of men, which would be the case for war casualties.

Y-STRs on the other hand, are better for tracing recent ancestry. This is because Y-STR markers mutated every 20 generations.  Paternally related men within the last few generations have identical or very similar Y-STR profiles.

So, scientists can accurately confirm the identity of unknown remains by matching the to paternal reference samples (e.g. a son, grandson or a nephew of the missing soldiers). The only snag is, because Y-DNA profiles are similar between related males, additional DNA tests will be required to identify the remains of related men (e.g. brothers, uncles-nephews, etc).

Mitochondria are the powerhouses in our cells. The DNA within the mitochondria is passed down from mother to child. Both men and women inherit they mtDNA from their moms. This strict maternal inheritance makes it useful for tracing maternal lines.

Also, mtDNA is more useful for analyzing samples that are old or have degraded DNA. This is because a single cell contains many mitochondria with hundreds to thousands of copies of mtDNA. It means there’s a higher chance of obtaining enough mtDNA for analyses. Especially compared to just two copies of the nuclear DNA, or just the single copy of the Y-DNA.

Maternally related people, even if they are generations apart, have identical or very similar mtDNA profiles, giving scientists a method to accurately trace maternal lineages. As with Y-DNA profiles the identical mtDNA profiles of siblings will require additional DNA tests for accurate identification.

Closure for the families

Following the transfer of the remains, hundreds of families of American soldiers missing in action or presumed killed in Korea gathered in Washington to learn more about the remains. Many of them gave DNA samples that will function as reference samples to help identify these unknown soldiers.

Even with these samples, investigators have their work cut out for them. Multiple rounds of testing will be performed before these remains can be positively identified. But, once completed it will give much needed closure to families of soldiers that have been ‘missing’ for more than 50 years.

Previous articleCuring Alzheimer’s
Next articleWhy women cheat on their partners