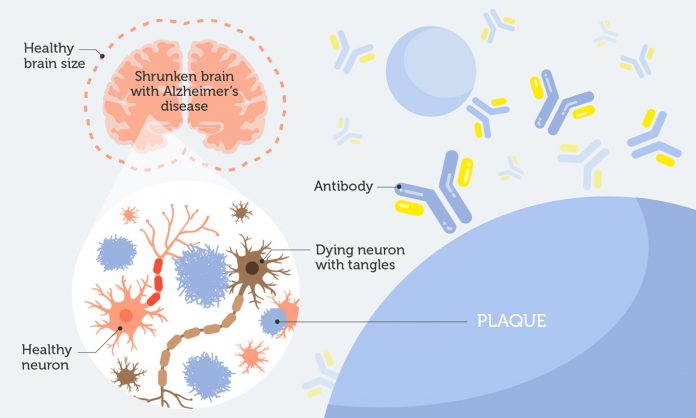 The latest experimental drug BAN2401 likely won’t be the next miracle Alzheimer’s drug.

When Biogen and Eisai presented the results of their Phase II clinical trial for BAN2401 at the Alzheimer’s Association International Conference in Chicago last week, it caused a flurry of activity.

The experimental antibody was deemed a failure just a few months ago. Patients who received it for 12 months, didn’t show any significant differences in cognitive decline or in the build-up of a brain protein that drives neurodegeneration.

Nevertheless, the companies persisted. Fast forward six months, add to that a series of extra analyses, now it looks like BAN2401 might be working for those that on the highest dose.

But, not everyone embraced these “positive” results, because the study wasn’t quite straightforward. To explain why, we have to first give a bit of background on the genetics of Alzheimer’s disease and beta-amyloid, the protein target of BAN2401.

Alzheimer’s disease (AD) is a progressive brain disorder that gradually destroys memory and other important mental functions. More than 90% of Alzhiemer’s cases are the late-onset form, with symptoms not appearing until after 65 years of age.

Variation in the APOE gene is the biggest genetic risk factor linked to late-onset AD. There are three versions (called alleles) of this gene – APOE e2, APOE e3 and APOE e4. We inherit two copies of the APOE gene, one from each parent. This means that a person can carry either two identical copies of the APOE gene (defined as homozygous) or two different APOE alleles (heterozygous).

Two abnormal structures, plaques and tangles, are detected in affected brains. Plaques are made of a protein called beta-amyloid. Accumulation of beta-amyloid is one of the major changes observed in the brain of an Alzheimer’s patient.

Beta-amyloid is believed to be a key culprit behind the progression of AD. Plaques block nerve cells from talking to each other, eventually killing them.

So, it’s not surprising most research efforts have focused on stopping or reversing beta-amyloid deposits. BAN2401 is an antibody that binds to amyloid plaques. It stops them from clustering and clears the clumps that are already there.

Several groups have unsuccessfully attempted antibodies that selective target and destroy amyloid plaques. Many of these drugs have sharply reduced the levels of beta-amyloid. However, they didn’t really affect the progression of Alzheimer’s.

Because of this many scientists are skeptical about BAN2401 (and other agents that target beta-amyloid). They believe that targeting the beta-amyloid protein may not be the right path for stopping Alzheimer’s.

However, that’s not the only reason behind the widely varied response to Biogen and Eisai’s announcement.

A snag in the experiment

At high doses BAN2401 caused minor brain swelling in 10% of the patients – a side effect that was also seen with many other anti-amyloid antibodies. The swelling is a potential safety risk for patients involved, especially to those with the APOE4 e4 allele with increased risk of AD.

In July 2014, the companies were asked by an unnamed regulatory agency outside of the US to not assign APOE4 e4 carriers to the highest dose in their trial. They complied with the request.

Now here we have a problem! The 30% reduction in cognitive decline, announced at the conference, was only observed in patients who received the highest dose of BAN2401. But, this group didn’t include patients with APOE e4.

So, did these patients show a slower mental decline because the drug was working? Or was it because fewer people in the group were at high-risk for decline, because of genetics? It’s impossible to tell.

Hope for the future

Even without these caveats, BAN2401 is still far from being the next miracle Alzhiemer’s drug. The next stages of testing for this experimental antibody are not yet established.

However, BAN2401 isn’t the only pony in the running for these companies. They are currently running a larger phase III clinical trial for another amyloid-targetting antibody, aducanumab. Results from this study are expected in 2020.

This means there’s still hope for the future. Scientists around the world are confident that we will one day beat Alzheimer’s. So we should remain hopeful.