Rediscovering the Remains of Jörg Jenatsch 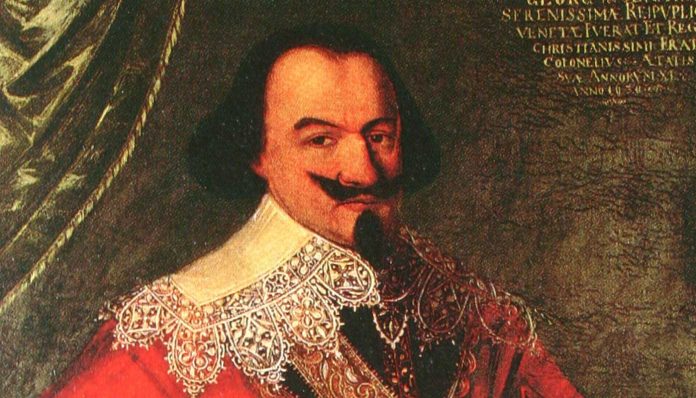 Jörg Jenatsch was an important political leader during the Thirty Years War in Graubünden (Grisons), now in present-day Switzerland. In the past, the rural communities of Graubünden controlled the Valtellina valley (an important north-south thoroughfare), and the Spanish, French and Venetians frequently attempted to gain some control of this region. Jenatsch was a Calvinist minister and often-violent Protestant leader in Graubünden. He was involved in many murders and assassinations (despite being a man of the cloth) and was forced to flee Graubünden for many years. During his exile in Venice, he converted to Catholicism and became a professional soldier and military entrepreneur. He then spent many years attempting to convince Ferdinand II, (Emperor of the Holy Roman Empire) to grant him a title of nobility, but he was assassinated before achieving this goal in 1639. His body was buried in the cathedral of Chur, Switzerland.

Where exactly was Jörg Jenatsch buried?

Since the burial of Jenatsch, there have been many renovations and rearrangements of the tomb slabs at the cathedral, so the exact location of his tomb became unknown. In 1959, a Swiss anthropologist (Erik Hug) identified his tomb and remains based on clothing and head injuries and he was reburied in 1961. Hug reported his findings in several public lectures, but never published a scientific paper of the Jenatsch case. At Hug’s death in 1961, all the documents of his Jenatsch research disappeared and the exact location of Jenatsch’s skeleton was unknown once again.

In 1991, Hug’s documents regarding Jenatsch were found in a safe inside the monastery shop. Once again researchers knew where to find Jenatsch’s presumed remains, but this time they aimed to confirm the positive identification of the remains using genetic analyses. The skeleton was exhumed and samples were collected for DNA analyses and compared to three paternal descendants of Jenatsch’s great-grandfather.

Genetic analysis of the putative remains of Jenatsch

Three living relatives of Jenatsch were identified and provided DNA samples to confirm the authenticity of Jenatsch’s skeleton. These three relatives were all paternal descendants of Anton Jenatsch (Jörg Jenatsch’s great-grandfather), hence should share the same paternally inherited Y-DNA profile as Jörg Jenatsch.

There are two types of Y-DNA markers that can be analyzed – very slow changing SNPs (single nucleotide polymorphisms) and fast changing STRs (short tandem repeats). SNP analysis was used in this investigation to show that all three descendants and Jenatsch belong to the Y-haplogroup R1b1b2a2g. The three descendants had an identical Y-DNA STR haplotype (at the 23 markers analyzed). This haplotype matched that obtained from Jenatsch’s bone and tooth samples, apart from one repeat difference at each of three markers. However, STR markers are fast-changing variations and these three changes are entirely possible in the twelve generations separating the three living descendants and Jenatsch.

The DNA tests conducted in this study have defined the Y-DNA STR profile of Jörg Jenatsch. If you have taken the Y-DNA STR marker (Paternal Ancestry) test you can determine if you have descended from the same paternal lineage as this Swiss national hero.

Previous articleWas Kaspar Houser the True Prince of Baden?
Next articleWhat Happened to the Remains of the Infamous Outlaw Ned Kelly?