Re-convergence: The Ancient DNA Story of People of America 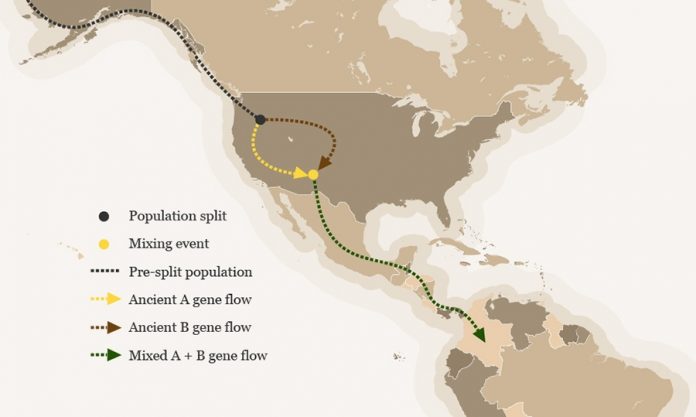 The first people to arrival in the Americas split into two groups, and then mingle again 1000 years later.

Until recently research suggested the first people in the Americas split into two branches: Northern and Southern. And, all ancient populations in Central and South Americas arose from this Southern branch.

A new genetic study published in Science1 that looked at ancient DNA challenges this notion, showing that many Indigenous people in the southern continent have at least some “northerner” DNA.

If Jurassic Parkis the first thing that comes to mind when you hear ancient DNA, you are not alone. There was a time when extracting DNA from ancient samples was considered to come straight out of scientific fantasy.

But, in the past few decades both DNA from ancient samples was considered to come straight out of scientific fantasy at a revolutionary pace2. Scientists can now gather genetic information from samples that are a million years old.

The oldest DNA sequence ever recovered comes from Northern Canadian horse that was 700,000-years-old3. Given that it takes more than 521 years for the DNA in a sample to degrade in half (half-life of DNA), 1-2 million years have to pass before these ancient DNA samples become non-usable4.

The great break up

In this study, researchers co-led by Toomas Kivisild (Cambridge University) and a geneticist Ripan Malhi (University of Illinois), looked at 91 ancient genomes of people who lived more than 4,800 years ago from what are now Alaska, California and Ontario.

They compared their data to publically available genetic data of both living and ancient people from North and South America. The DNA was also compared to communities in Asia.What they found was that living Native Americans descended from a single population of Asians, who likely came over the Great Barrier Reef, and settled in Alaska.

But soon after, this original population split into two, which are designated as ANC-A and ANC-B. ANC-A represents the southern branch, these are people that continued down the Pacific coast.

Indigenous ancestors of the northern branch (ANC-B) migrated to the Great Lakes region. This split happened around 18,000 to 15,000 years ago. The two branches remained apart for a long time.

But when the researchers looked at their DNA samples from people in California and further south, they found evidence of mixing. These samples had a mixture of DNA from both ANC-A and ANC-B lineages.

For example, people who lived 4,500 years ago in the Channel Islands, off the coast of California were 58% ANC-A and 42% ANC-B. Some of the indigenous populations that live in south Chile (Chilote and Huilliche people) had as much as 70% ANC-B or “northern” DNA.

These results support the idea that after few thousand years of being separated, the two lineages re-joined and mingled.

There are several different possible scenarios that can explain these observations.

Dr. Malhi and his team are planning to explore these hypotheses further. Initially they will be tracing the histories of living Native Americans, then find more ancient DNA to look at from other parts of the Americas.

The bottom line – the story of human migrations through the Americas is much more complex that was initially thought.